Starting April 28th, we saw a 30 times increase in cross site scripting attack volume, originating from a single attacker, and targeting over a million WordPress sites. We published research detailing the threat actor and attack volume increase on May 5th. By the time we published, the attack volume had dropped back down to baseline levels.

The chart below describes the attack volume we are seeing. 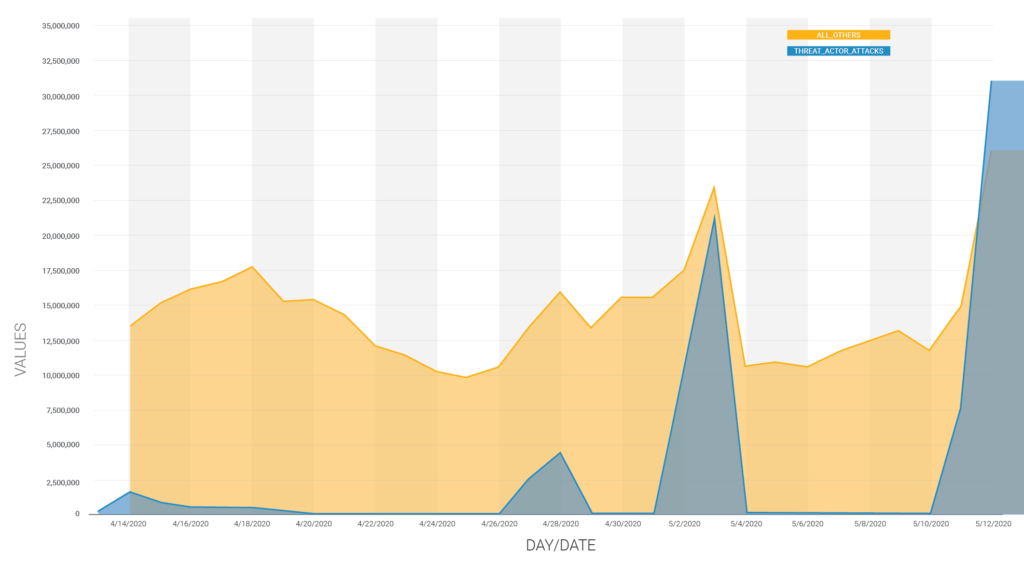 These attacks are targeting the same vulnerabilities as the previous wave, with a heavy focus on older XSS vulnerabilities. Additionally, we have been able to link this threat actor to previously described attacks as far back as February 9, 2020.

A History of attacks

Our Threat Intelligence team has been able to link this threat actor to previous attacks with payloads hosted at domains: collectfasttracks[.]com and destinyfernandi[.]com.

Our logs show that this attacker has been ramping up attack volume, sustaining the attack over a two day period, and then reducing volume to a trickle. Each of these surges has progressively increased in volume as the attacker becomes more aggressive.

The earliest attacks containing the destinyfernandi[.]com payload occurred on February 9th and 10th, 2020 and targeted over 200,000 sites with 3.8 million requests.

On March 14 and 15, 2020, attacks containing the collectfasttracks[.]com payload ramped up and targeted over 500,000 sites with more than 7 million requests. That is an approximate doubling in attack volume and number of sites targeted from February to March.

Previous attacks appeared to be spaced roughly a month apart and had much lower volume. Comparatively, the last 30 days have seen 4 attacks of increasing size, cumulatively targeting over 1.3 million sites.

While this threat actor is not targeting different vulnerabilities, the new wave of attacks is hosting the initial malware payload on a different domain:

The script hosted on the new domain is similar to the one previously hosted at count[.]trackstatisticsss[.]com.

There are a few changes that indicate the attacker is refining their technique. They fixed a bug in the previous version of their PHP backdoor that would have prevented it from being usable on most sites. They have also added two additional backdoor variants, one of which is similar to the backdoor used in a previous attack campaign.

The screenshot below has three chunks of PHP code, each starting with a <?php tag. These are three separate malware variants that the attacker embeds in infected sites. The first loads code from the attacker’s domain and the second and third malware variants allow the attacker to manually execute malicious code by sending a request containing a password and encoded data to execute.

When the older backdoor attempted to execute the payload located at https://stat[.]trackstatisticsss[.]com/n.txt, it tried to use the PHP include() function to include the payload source code. This was a bug because include() expects a file. The attackers should have been including the temporary file containing the payload. We spotted this bug during our previous research but neglected to mention it in our earlier post in order to avoid reporting bugs to malware authors.

The threat actor has now fixed this bug and the current backdoor correctly includes the payload located at http://css[.]digestcolect[.]com/m.txt.

The two additional backdoors, shown in the screenshot above, allow attackers to maintain access to the site, even if the payload URL is taken down due to an abuse complaint.

While previous indicators of compromise still apply, the updated final payload also uses the following string to determine whether the site is already infected. It can do this because this is the name of the variable that it attempts to insert into every JavaScript file on the infected site:

The presence of the following domains in your database or filesystem should be considered an indicator of compromise:

As with most attack campaigns, the attacker frequently rotates IP addresses. At the moment, we are seeing attacks from these top 10 attacking IP addresses.

What should I do?

As with the previous attacks, the majority of vulnerabilities being targeted are Cross-Site Scripting (XSS) flaws. The Wordfence Firewall’s built-in XSS protection provides protection from these attacks. Nonetheless, we strongly recommend updating any outdated plugins or themes. We also recommend deactivating and deleting any plugins installed on your WordPress site that have been removed from the official WordPress repository.

If you are running the Wordfence plugin, our scanner will alert you if have any plugins or themes with known vulnerabilities, or that have been removed from the WordPress repository. If you are a Wordfence Premium customer, the real-time blacklist will detect and block access to your site from these malicious IP addresses.