In this blog we will take a look under the hood of the cluster file system in Windows Server 2012 R2 called Cluster Shared Volumes (CSV). This blog post is targeted at developers and ISV’s who are looking to integrate their storage solutions with CSV.

Note: Throughout this blog, I will refer to C:\ClusterStorage assuming that the Windows is installed on the C:\ drive. Windows can be installed on any available drive and the CSV namespace will be built on the system drive, but instead of using %SystemDrive%\ClusterStorage\ I’ve used C:\ClusteredStorage for better readability since C:\ is used as the system drive most of the time.

First, let us look under the hood of CsvFs at the components that constitute the solution.

The diagram above shows a 3 node cluster. There is one shared disk that is visible to Node 1 and Node 2. Node 3 in this diagram has no direct connectivity to the storage. The disk was first clustered and then added to the Cluster Shared Volume. From the user’s perspective, everything will look the same as in the Windows 2008 R2. On every cluster node you will find a mount point to the volume: C:\ClusterStorage\Volume1. The “VolumeX” naming can be changed, just use Windows Explorer and rename like you would any other directory.  CSV will then take care of synchronizing the updated name around the cluster to ensure all nodes are consistent.  Now let’s look at the components that are backing up these mount points.

Sometimes we will use terms “disk” and “volume” interchangeably because in the samples we will be going through one disk will have only one NTFS volume, which is the most common deployment configuration. In practice, you can create multiple volumes on a disk and CSV fully supports that as well. When you move a disk ownership from one cluster node to another, all the volumes will travel along with the disk and any given node will be the coordinator for all volumes on a given disk. Storage Spaces would be one exception from that model, but we will ignore that possibility for now.

This diagram is complicated so let’s try to break it up to the pieces, and discuss each peace separately, and then hopefully the whole picture together will make more sense.

On the Node 2, you can see following stack that represents mounted NTFS. Cluster guarantees that only one node has NTFS in the state where it can write to the disk, this is important because NTFS is not a clustered file system.  CSV provides a layer of orchestration that enables NTFS or ReFS (with Windows Server 2012 R2) to be accessed concurrently by multiple servers. Following blog post explains how cluster leverages SCSI-3 Persistent Reservation commands with disks to implement that guarantee https://techcommunity.microsoft.com/t5/Failover-Clustering/Cluster-Shared-Volumes-CSV-Disk-Ownership….

Cluster makes this volume hidden so that Volume Manager (Volume in the diagram above) does not assign a volume GUID to this volume and there will be no drive letter assigned. You also would not see this volume using mountvol.exe or using FindFirstVolume() and FindNextVolume() WIN32 APIs.

On the NTFS stack the cluster will attach an instance of a file system mini-filter driver called CsvFlt.sys at the altitude 404800. You can see that filter attached to the NTFS volume used by CSV if you run following command:

The next stack we will look at is the system volume stack. On the diagram above you see this stack only on the coordinator node which has NTFS mounted. In practice exactly the same stack exists on all nodes. 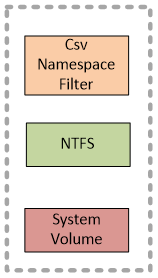 The last stack we will look at is the stack of the CSV file system. Here you will see two modules CSV Volume Manager (csvvbus.sys), and CSV File System (CsvFs.sys). CsvFs is a file system driver, and mounts exclusively to the volumes surfaced up by CsvVbus. 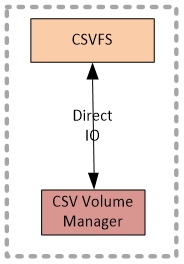 Now that we are familiar with the components and how they are related to each other, let’s look at the data flow.

First let’s look at how Metadata flows. Below you can see the same diagram as on the Figure 1. I’ve just kept only the arrows and blocks that is relevant to the metadata flow and removed the rest from the diagram. 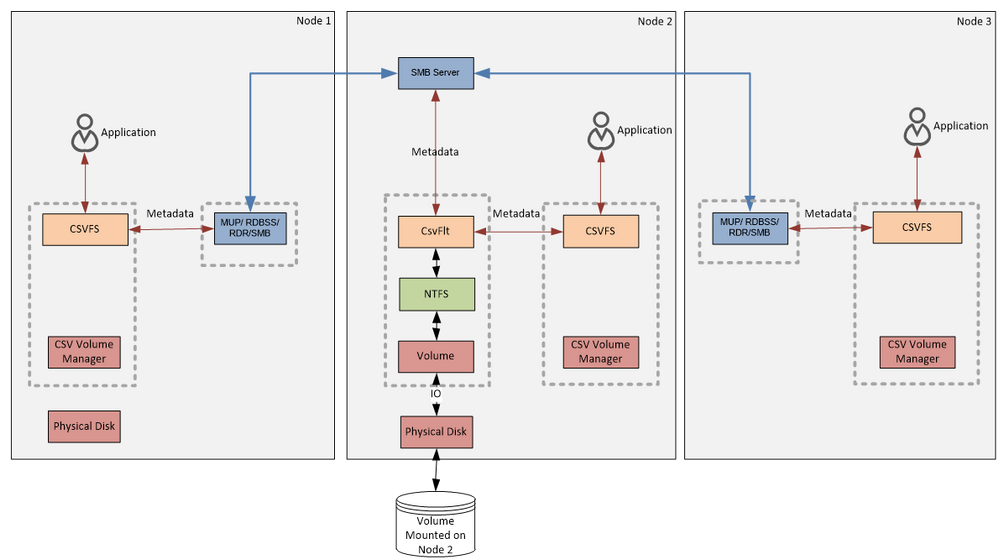 Our definition of metadata operation is everything except read and write. Examples of metadata operation would be create file, close file, rename file, change file attributes, delete file, change file size, any file system control, etc. Some writes may also, as a side effect cause a metadata change. For instance, an extending write will cause CsvFs to extend all or some of the following: file allocation size, file size and valid data length. A read might cause CsvFs to query some information from NTFS.

On the diagram above you can see that metadata from any node goes to the NTFS stack on Node 2. Data server nodes (Node 1 and Node 3) are using Server Message Block (SMB) as a protocol to forward metadata over.

Metadata are always forwarded to NTFS. On the coordinator node CsvFs will forward metadata IO directly to the NTFS volume while other nodes will use SMB to forward the metadata over the network.

Next, let’s look at the data flow for the Direct IO . The following diagram is produced from the diagram on the Figure 1 by removing any blocks and lines that are not relevant to the Direct IO. By definition Direct IO are the reads and writes that never go over the network, but go from CsvFs through CsvVbus straight to the disk stack. To make sure there is no ambiguity I’ll repeat it again: – Direct IO bypasses volume stack and goes directly to the disk.

Both Node 1 and Node 2 can see the shared disk – they can send reads and writes directly to the disk completely avoiding sending data over the network. The Node 3 is not in the diagram on the Figure 7 Direct IO Flow since it cannot perform Direct IO, but it is still part of the cluster and it will use block level redirected IO for reads and writes.

The next diagram shows a File System Redirected IO request flows. The diagram and data flow for the redirected IO is very similar to the one for the metadata from the Figure 6 Metadata Flow:

Later we will discuss when CsvFs uses the file system redirected IO to handle reads and writes and how it compares to what we see on the next diagram – Block Level Redirected IO : 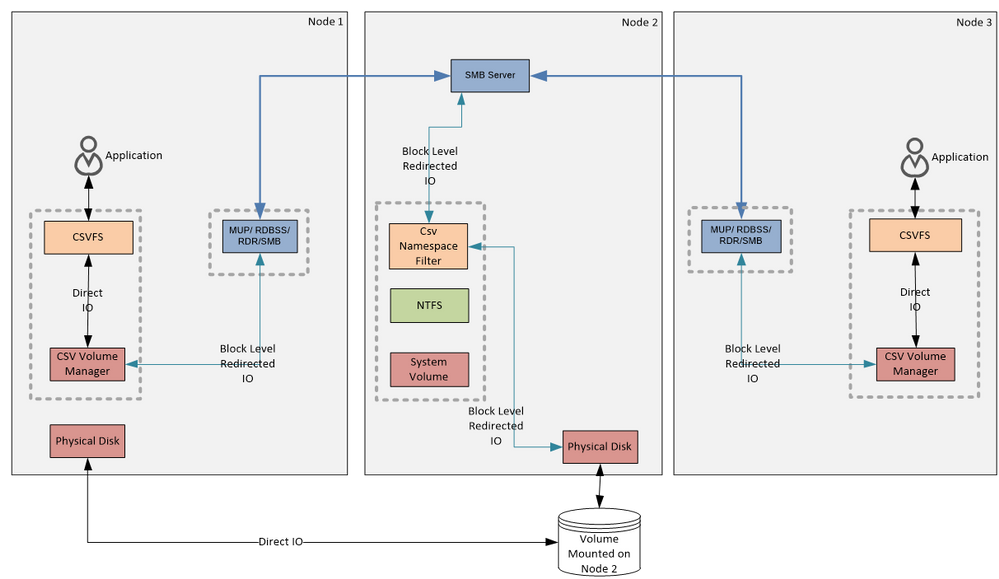 Note that CsvFs sends the Block Level Redirected IO to the CsvNsFlt filter attached to the system volume stack on the Coordinating Node. This filter dispatches this IO directly to the disk bypassing NTFS and volume stack so no other filters below the CsvNsFlt on the system volume will see that IO. Since CsvNsFlt sits at a very high altitude, in practice no one besides this filter will see these IO requests. This IO is also completely invisible to the CSV NTFS stack. You can think about Block Level Redirected IO as a Direct IO that CsvVbus is shipping to the Coordinating Node and then with the help of the CsvNsFlt it is dispatched directly to the disk as a Direct IO is dispatched directly to the disk by CsvVbus.

What are these SMB shares?

CSV uses the Server Message Block (SMB) protocol to communicate with the Coordinator Node. As you know, SMB3 requires certain configuration to work. For instance it requires file shares. Let’s take a look at how cluster configures SMB to enable CSV.

There is a hidden admin share that is created for CSV, shared as ClusterStorage$. This share is created by the cluster to facilitate remote administration. You should use it in the scenarios where you would normally use an admin share on any other volume (such as D$). This share is scoped to the Cluster Name. Cluster Name is a special kind of Network Name that is designed to be used to manage a cluster. You can learn more about Network Name in the following blog post.  You can access this share using the Cluster Name, i.e. \\<cluster name>\ClusterStorage$

Users are not expected to use these shares – they are ACL’d so only Local System and Failover Cluster Identity user (CLIUSR) have access to the share.

All of these shares are temporary – information about these shares is not in any persistent storage, and when node reboots they will be removed from the Server Service. Cluster takes care of creating the shares every time during CSV start up.

You can see that that Cluster Shared Volumes in Windows Server 2012 R2 is built on a solid foundation of Windows storage stack, CSVv1, and SMB3.

To learn more, here are others in the Cluster Shared Volume (CSV) blog series:

Cluster Shared Volume (CSV) Inside Out