The default mailing app pre-installed on millions of iPhones and iPads has been found vulnerable to two critical flaws that attackers are exploiting in the wild, at least, from the last two years to spy on high-profile victims.

The flaws could eventually let remote hackers secretly take complete control over Apple devices just by sending an email to any targeted individual with his email account logged-in to the vulnerable app.

According to cybersecurity researchers at ZecOps, the bugs in question are remote code execution flaws that reside in the MIME library of Apple's mail app—first, due to an out-of-bounds write bug and second, is a heap overflow issue.

Though both flaws get triggered while processing the content of an email, the second flaw is more dangerous because it can be exploited with 'zero-click,' where no interaction is required from the targeted recipients.

According to the researchers, both flaws existed in various models of iPhone and iPad for the last 8 years since the release of iOS 6 and, unfortunately, also affect the current iOS 13.4.1 with no patch yet update available for the regular versions.

What's more worrisome is that multiple groups of attackers are already exploiting these flaws—for at least 2 years as zero-days in the wild—to target individuals from various industries and organizations, MSSPs from Saudi Arabia and Israel, and journalists in Europe.

"While ZecOps refrain from attributing these attacks to a specific threat actor, we are aware that at least one 'hackers-for-hire' organization is selling exploits using vulnerabilities that leverage email addresses as the main identifier." 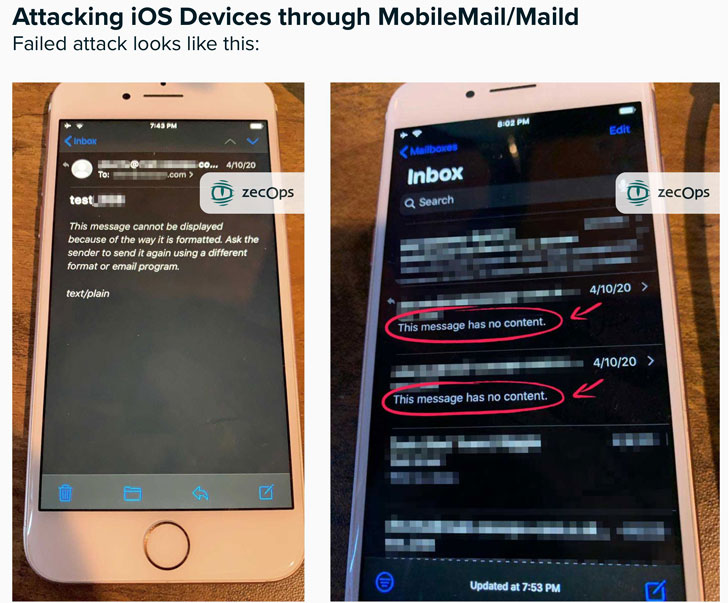 According to the researchers, it could be tough for Apple users to know if they were targeted as part of these cyber-attacks because it turns out that attackers delete the malicious email immediately after gaining remote access to the victims' device.

"Noteworthy, although the data confirms that the exploit emails were received and processed by victims' iOS devices, corresponding emails that should have been received and stored on the mail-server were missing. Therefore, we infer that these emails were deleted intentionally as part of an attack's operational security cleanup measures," the researchers said.

"Besides a temporary slowdown of a mobile mail application, users should not observe any other anomalous behavior."

To be noted, on successful exploitation, the vulnerability runs malicious code in the context of the MobileMail or maild application, allowing attackers "to leak, modify, and delete emails."

However, to remotely take full control over the device, attackers need to chain it together with a separate kernel vulnerability.

Though ZecOps hasn't mentioned any detail on what kind of malware attackers have been using to target users, it did believe that attackers are exploiting the flaws in combination with other kernel issues to successfully spy on their victims.

Beware! No Patch Yet Available

Researchers spotted in-the-wild-attacks and discovered the related flaws almost two months ago and reported it to the Apple security team.

At the time of writing, only the beta 13.4.5 version of iOS, released just last week, contains security patches for both zero-day vulnerabilities.

For millions of iPhone and iPad users, a public software patch will soon be available with the release of the upcoming iOS update.

Meanwhile, Apple users are strongly advised to do not to use their smartphones' built-in mail application; instead, temporarily switch to Outlook or Gmail apps.

In a piece of separate news, we today reported about another in-the-wild iPhone hacking campaign where Chinese hackers have been caught targeting Uyghur Muslims with exploit iOS chains and spyware apps.

Computer manufacturing giant Dell has released a new security tool for its commercial customers that aims to protect their computers from stealthy and sophisticated cyberattacks involving the compromise of the BIOS.

BIOS (Basic Input Output System) is a small but highly-privileged program that handles critical operations and starts your computer before handing it over to your operating system.

Protecting the BIOS program is crucial because:

According to Dell, the controls offered by SafeBIOS can quickly mitigate the risk of BIOS tampering by bringing them to your attention timely, allowing you to quarantine infected PCs.

"Organizations need the ability to detect when a malicious actor is on the move, altering BIOS configurations on endpoints as part of a larger attack strategy. SafeBIOS now provides the unique ability to generate Indicators of Attack on BIOS configurations, including changes and events that can signal an exploit," David Konetski, VP Client Solutions Group CTO at Dell said in a blog post.

The company says the SafeBIOS Events and Indicators of Attack tool is currently available for Dell commercial PCs through its Dell Trusted Devices solution.

Office 2019 Visio Plan 2 Visio Professional 2019 Visio Standard 2019 More...
This article applies to Office Home & Business, Office Professional, and individually purchased Office apps.If you bought multiple copies of Office and used the same Install button to install Office on multiple PCs, activation fails on the other PCs. This happens because each Install button is associated with a unique product key that can only be installed on one PC. To fix this, you can change the product key for the other PCs where you installed Office.

Note: After you change your product key, we recommend that you create a list to manage the product keys that you've installed. To learn how, see Manage multiple one-time-purchase Office installs that use the same Microsoft account.

Select your Office version below.